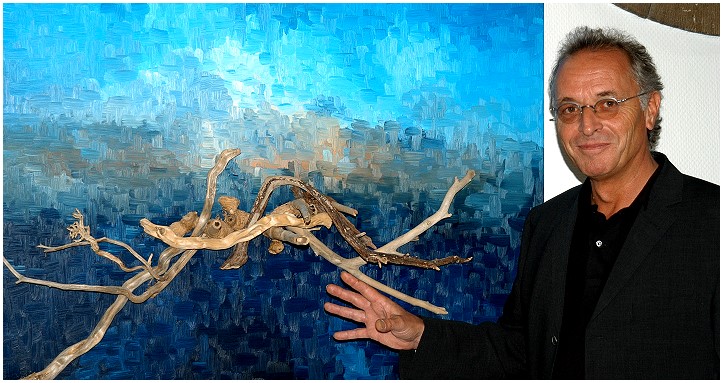 Theo Hues, born in 1954 in Recklinghausen, is a German artist and educator. He studied art and music in Frankfurt am Main. From 1980 to 2020, Hues operated as a teacher and art teacher. He was a mentor in the art educational training for students and teacher trainees. He supported the project “School without Racism - School with Courage,” and was involved in the worldwide community of artists and human rights organization “Artists for Freedom”.

Influenced by different styles of art and artists of the '60s, such as Andy Warhol and Roy Lichtenstein and the arts as a socio-political statement about Joseph Beuys, and affected by the dispute at German universities and universities of art as musically, aesthetic education and visual communication, Hues developed early on his own artistic style.

Art for him is a reflection of social life. The critical engagement with his environment is thematically presented in clear, expressive images, which are limited to essential design resources. These criteria characterize today his paintings, graphics, object-pictures and serial collages. Theo Hues lives in Bad Nauheim. With his exhibitions and campaigns, he is for several years nationally and internationally in the public eye. 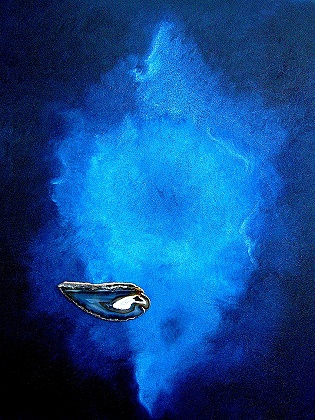 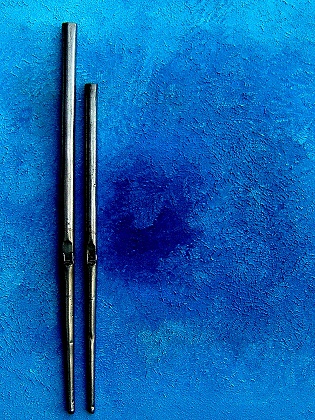 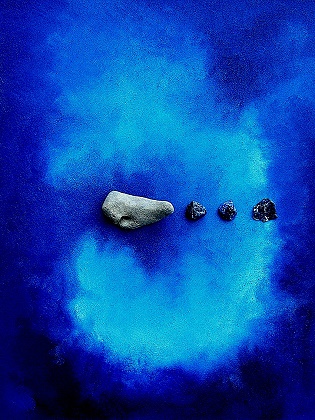 Doesn't the composition of color affect our visual fascination of things? Isn't the effect of an object influenced by the reflection of light and the natural color of its environment?

Weathered wood – desiccated from sunlight and washed in the movements of the sea – lays stranded on the coast of Tuscany in view of the observer. Depending on the color of the sky and the sea, it creates a most brilliant appeal. A stone found at a Peloponnesian river delta in Greece definitely has its own charm. The color and form of the stone is fascinating, and after looking at it for a while, it tells the history of the geological evolution of this planet. These 'little things' are treasures themselves, which have the power to move us. We search for them time and time again because they are witnesses of life, change and transition.

Natural artifacts such as stones, plants or roots fascinate through their bizarre forms and colors, and provide information about earth's continuous process of development. By putting those fragments in a suitable spectrum of light and color – preferably blue – they turn into unique works of art.

Do you know the idyllic view at the Mediterranean Sea where the countryside unites with the blue of the water and sky and emerge as a vibrant shine?

The artistic theme, Fragments, is based on natural perception. It is inspired by deliberate examination and observation of the environment with a photographic eye. The chosen motif is filtered and reduced to the main principles of composition, and through intentional artistic means of expression, it is put into a new and evocative context.

The object paintings are clearly structured. The fragments positioned in the foreground, stimulate through color and form and lead to the original place of discovery. They are mainly geological witnesses of time, and with an appropriate color and structure of the background, they appear as a relief. In this complete and unified color arrangement, the fragments create the full power of expression. The materials are mounted on a linen screen where the whole painting gets a newly designed order. They harmoniously submit to the colored pattern on the surface and give the painting a plastic character without losing the extraordinary clarity of form and color.

Lifeless branches, weathered wood and tree bark have been depicted as well as washed out stones, porous lava rocks, and fossils. Each painting's fragments has its own certain symbolism. They are mounted as an assemblage and are a part of a natural materialistic process of origin and development on this earth. Man-made objects defeated by chemical decomposition and disintegration and objects found in nature are released out of their original environment and combined in a collage-like, expressionistic painting to construct a specific association and a new artistic context. On one hand, the individually chosen objects are historical records of life and evolution; on the other, they refer to the personal life of the artist and reflect his connection to life and nature.

The colors are applied on the canvas with purposeful brush lines in repetitive directions. The points or lines appear as mosaic stones that work closely together or blend with each other. With the powerful rhythm of the brush lines and large quantities of color, the paintings develop an intense expression. They appear with bright, thickly applied oil colors, which are used with various nuances and gradations. The contrasts of color brightness give the painting a three-dimensional appearance, and the represented color design is striking. These expressive color combinations form the foundation of the painting: the "Farbraum". The color blue is dominant and appears in a variety of tones such as indigo, cerulean, navy, ultramarine, or cobalt blue and their different mixtures.

Blue is the right medium for overcoming the boundaries of the image and for creating an infinite color space, spilling over into the surroundings and permitting the observer to dip into the color. From here, the paintings get their fundamental meaning and their unique appeal.

Blue plays a superior role even though the color itself appears introverted. It is chosen for its symbolism of yearning and as an expression for the stability of the supernatural and the greatness of heaven. The color blue also influences the human senses; it determines a person's point of view and perception. Through diffraction and diffusion of sunlight, blue is quantitatively the dominant color because of the sky and oceans and of its influence on the visual field of perception.

Living on the "blue planet", life within our atmosphere would not be possible without water. Oceans and seas cover more than two-thirds of the Earth's surface. They might be the most valuable sources for the existence of life and are highly important for the entire eco-system and climate.

The blue structures of color, which remind us of the unfathomable depths of the sea and of the unreachable, endless widths of the sky, have a further meaning besides the message of the painting. They intensify and sensitize the perception of the painting's fragments and determine the question of their existence.

The mounted objects are immersed and pulled into the painting, even though they formally show a contrary relationship to the background. The works depict a connection of drawing and assemblage technique. They undoubtedly document the clarity of their design and arrangement, while the fragment reveals the main meaning.

The following universal phenomena are selected: the transience and process of change on Earth caused by the power of nature and geological regularities such as erosion and volcanic eruptions, accumulation and decomposition without the influence of humans, and questions of origin and cosmogony – the creation and emergence of the universe.